The kickoff activity was a team-building marshmallow challenge. Based on a friendly in-house contest started by employees at Intel, teams of four people are tasked with coordinating the construction of the tallest self-sustaining tower possible in 18 minutes. The structure, built using various building elements provided: strands of spaghetti, tape and twine, must support a marshmallow at its top. The clock started as soon as the challenge was announced and material were distributed, creating a sense of urgency as teams quickly strategized an approach to execute the design and construction.

After time had expired, only one tower was able to be self-supporting, coming in at 29 inches in height. Congratulations to Team Marek, Melinda, Danielle and Sean!

Presented by: Charlie Silver of M. Silver and Company

Charlie presented the concept of Partnering to get various construction stakeholders to work together harmoniously. Partnering is a formal management process in which all parties to a project voluntarily agree at the outset to adopt a cooperative, team-based approach to project development and problem resolution to eliminate — or at least reduce — conflicts, litigation, and claims. The process is typically used for large construction projects, but also applies for smaller complex projects. Partnering has been of proven benefit in improving the quality, cost effectiveness, and timeliness of projects using the process. 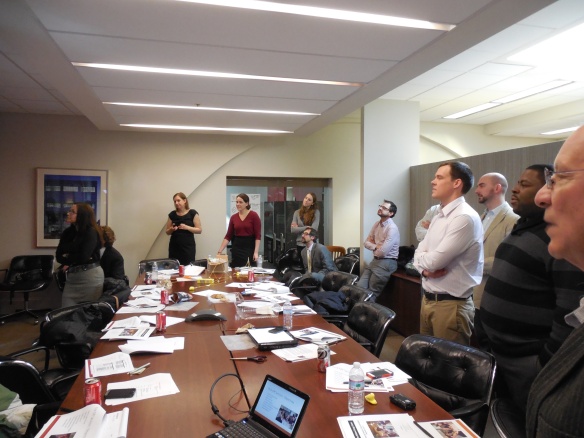 The Partnering process is organized by establishing four components: a Charter, Communication guidelines, a Problem Solving system and an Issue Resolution process. The first step is for the group to create a Charter with common goals and a clear mission statement (example: “Open Communication”). The Communication process is aided by individuals taking a DISC assessment test, a personality assessment tool, to help the group determine the most effective forms of communication for the project. The formal Problem Solving process is established by the group to identify issues that need attention and an Issue Resolution system is set in place to provide a fast and fair method to decide potential disputes.

Charlie presented and discussed case studies from that his company was involved in. As a Partnering facilitator, Charlie has to stay neutral and works for the project, not necessarily for the client who is cutting his paycheck.

After the presentation and a Q&A session, the class broke up into smaller groups and worked on team-building exercises, such as sharing little-known facts about ourselves and coming up with common group traits (ex: we are all wearing shoes).

The group is currently working on a large-scale design project in Arlington County for an undisclosed client. The design of the master planned campus, led by Bonstra/Haresign Architects with entitlements management by William H. Gordon Associates) includes the plans for a 30-plus story tower, directed by HKS Architects with pre-construction services provided by Davis Construction. The group discussed their specific roles and how they work together in the overall project. 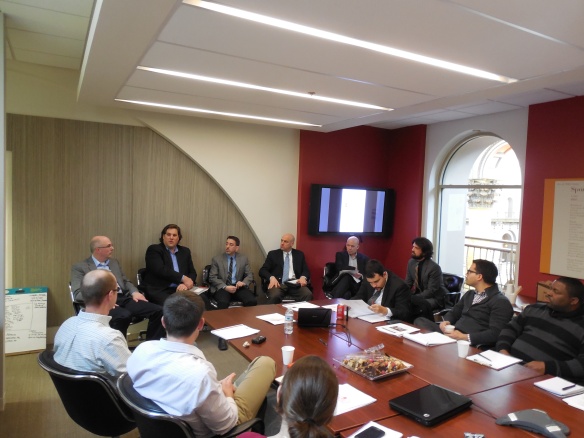 As the owner’s representative, CEW Project & Development Services is in charge of coordinating all the consultants and maintaining the project schedule. This is established, among many other activities, by weekly meetings, documenting all decisions, and creating visual diagrams of decision paths and timelines, many of which were shown and discussed to the class. A very high level of detail is required to proceed quickly and to establish a sound cost estimate at early stages of the design.

Meeting in the CFA’s boardroom at the NBM, Tom discussed the history and current day influence of the Commission. Established in 1910 by Congress, the Commission of Fine Arts is charged with giving advice to the Federal and District of Columbia governments on matters of design and aesthetics, as they affect the Federal interest and preserve the dignity of the nation’s capital. The Commission consists of seven “well qualified judges of the fine arts” who are appointed by the President and serve for a term of four years. Within DC, the Commission advises on design matters affecting the Historic District of Georgetown, under the Old Georgetown Act, as well as other private sector areas adjacent to federal interests, under the Shipstead-Luce Act. The Commission also provides advice on the design of coins and medals, and approves the site and design of national memorials, both in the United States and on foreign soil.

Large, recreated watercolor paintings from the McMillan Plan hung on the walls of the boardroom, where public meetings are held once a month.

This session illustrated many effective ideas of working together at different levels: within the internal team, as consultants coordinating on a project and at the regulatory level. Success is best achieved when operating across all these levels.