How is new and emerging technology shaping the profession of architecture? This is the question addressed by Clay Jackson and Tim Nuanes in their seminar for the 2017 Christopher Kelley Leadership Program. Throughout the afternoon’s session, presenters discussed how new technology is redefining business models, the many uses of virtual reality and augmented reality technology, the impact of “big data” and the architect-consultant, and how all of these tie together in architectural practice.

Hosted at the Studio Theater (14th and P St, NW), Session 6 of the 2017 CKLDP began with David Woessner of Local Motors kicking off the afternoon with a perspective from outside of the field of architecture.  Local Motors is an automobile manufacturer founded in 2007 with the mission of solving niche product needs through mass production on the scale of just a few thousand. Local Motors strives to shape the future, influencing humanity through the hardware they provide by taking advantage of 21st c
entury technological advances. 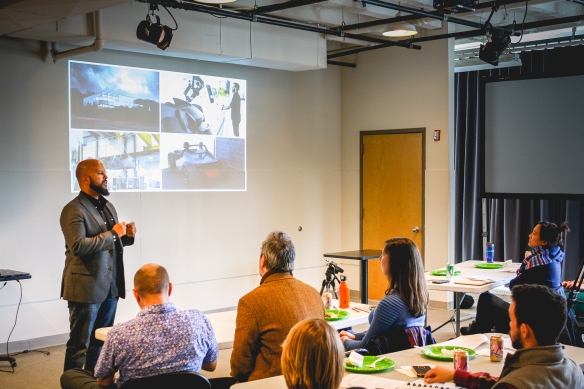 “What would Henry Ford have done in 1908 if he had the internet?” Woessner asked. “How would his assembly line structure be different?”

The team at Local Motors sought out their own answer to this query, structuring the organization by mirroring two major emerging trends: co-creation (i.e. crowdsourcing) and micro-manufacturing.  Through a co-creation platform, engineers and designers come together as a “hive-mind” to generate solutions for complex problems; they rely on cloud-based collaboration tools and brainstorm internationally.  On the production end, the manufacturer strives to “do complex things utilizing the best tooling and software to produce complex products on a limited footprint.” Or in more basic terms, create big things in small spaces. While the complexities of the auto industry and manufacturing may be foreign to most of the Scholars, there are transferrable lessons to be learned from another industry that has used technology to reinvent its entire process of design and production.

Following the lecture from Local Motors’, the session pivoted to a focus on technology becoming more ubiquitous in the field of architecture through virtual reality (VR) and augmented reality (AR). Hailing from Canada, Anthony Murry and Thomas Hirschmann of The Third Fate detailed their application of virtual reality for storytelling of spaces through the lens of “past, present, and future.”

Focusing on the past, The Third Fate uses VR to capture the memory of a place.  This can recreate an experience for someone else – such as amazed recreations of the BIG maze at the National Building Museum, or unglamorous moments such as the dilapidation of the Miami Marine Stadium. In the realm of “transforming the present,” VR is a tool for experiential tours, such as their idea for Battersea Station. Visitors to an historic smokestack could take in present day London in reality or, through virtual reality, experience London as it was during the World War 2 air strikes with barrage balloons floating high above the city.  In the final segment called “envisioning the future,” the speakers discussed the importance of a “render-to-real ratio” to trick your brain into thinking the entire rendering is real.

Throughout The Third Fate’s presentation, the group engaged in a discussion of morals and ethics in storytelling – in recreating the past through virtual reality, how do you distinguish between what was real and what is a modern conception superimposed into the past? Will virtual reality introduce a more real experience of a design concept, complete with “the un-prettiness of reality?”, e.g. street signs and traffic signals that block a view and are obscured from typical design visualization.

While the Third Fate focus their work in virtual reality, the group got a glimpse of augmented reality through Bill Santos of Gensler. Santos introduced the Microsoft HoloLens and its potential as the workspace of the future. Virtual monitors projected on a real-life surface can allow you to transform any seat or piece of wall into a workstation. Some of the challenges to integration right now are the reliance on Wi-Fi for connectivity, and the weight of the hardware that is worn around the user’s head.

During a short break, the Scholars and presenters were able to experiment with the VR experiences The Third Fate brought, and try out Gensler’s HoloLens.

“Big data” is another emerging industry trend that was addressed by Fady Barmada of Array Architects.  He spoke about the use of GIS to layer data and maps and guide decision making that happens before the constraints of a project scope and budget are set. Presenting from his perspective of practice in healthcare architecture, Barmada demonstrated how use of big data can drive hospital expansions and services based on the needs of the demographics they serve. Post-occupancy evaluations are another practice common in healthcare architecture that can harness the power of technology. Database technology can aggregate data from front-end metrics and POE’s to refine the decision-making process and evidence-based design power.

The topic of ethics arose again with the concept of the architect as a consultant. Acting as an architect-consultant, professionals can help a client to determine their need and set a budget, expanding the realm of architecture beyond the conventional constraints usually inherent to a pre-defined project. However, this business model may raise suspicions that the architect-consultant is using its position to drive clients towards a self-serving solution in the shape of a new building project that may be beyond a client’s true requirements.

The day’s presentations wrapped up with a lecture from Jeff Barber, a Principal and Regional Design Experience Leader with Gensler. Through his presentation, Barber knit together how many different technologies – new and old – are useful in achieving the ultimate goals of the profession: design and construction. In their Fab Labs, Gensler integrates technology like laser cutters and 3D-printers in the production of conventional physical models. A myriad of technologies go into producing many design and visualization tools, from 2D renderings to simulations and (with the advent of VR) immersion. These tools aid both designers and clients to understand and experience spaces as they are developed. Meanwhile, digital fabrication, full scale 3D-printing, and point-cloud scanning are transforming the construction process.

“We are not leaving behind the ways we used to draw, think, investigate,” Barber says, “but now the spectrum is much richer.”