The eighth and final session of the 2014-2015 CKLDP was held at the District Architecture Center.  Dennis Daisey and Jeremy Sharp closed out the year with a fantastic session looking at the Future of the Practice. 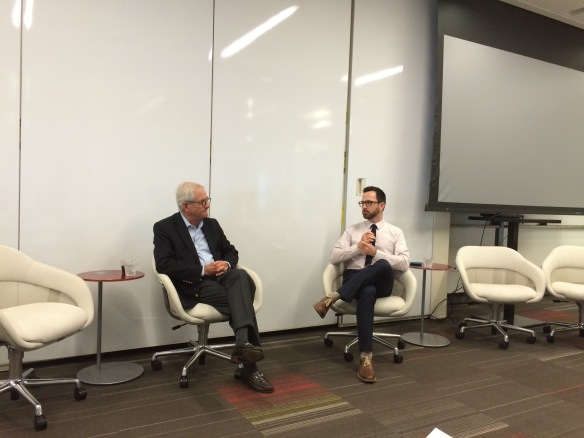 To look forward, it’s important to understand the past. Coke Florance, FAIA, LEED AP from Smithgroup JJR came in to offer his perspective over his 40+ years in the industry. Coke explained the evolution of the design firm; in 1956, the average firm size was 40 people.  There was no marketing department – marketing consisted of “answering the phone, unlocking the front door, going to cocktail parties and ivy league connections.”  Oh how the times have changed.  Coke elaborated on the 4 big changes he’s seen; technology, preservation, sustainability and accessibility.  Technology “allows us to show our clients, which is a critical act of leadership.”  Coke ended with a great quote that he gave the mother of a student who asked if her kid should go into architecture.  Coke replied “it’s just like bullfighting, it’s important to be good.” 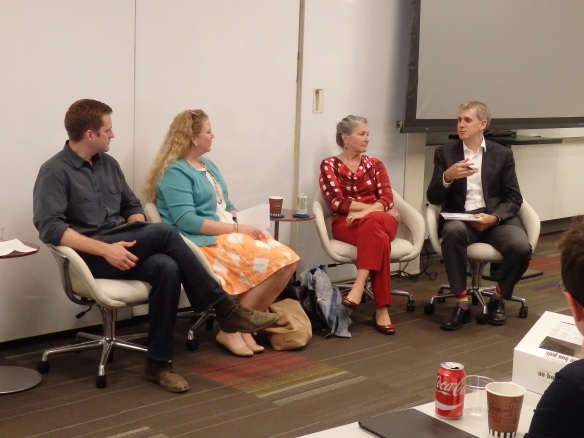 A panel discussion followed the interview. The topic: how architects will work with clients in the future.  Panelists were Martin Ditto from Ditto Residential; Brian Hanlon, AIA LEED AP, Vice President, Skanska USA Building; Jennifer Olson, Principal at KGO Management and Mina Wright, Director of Office Planning and Design Quality at the U.S. General Services Administration.  There was a lot of talk about the value architects provide.  Mina explained: “You’re not bringing value if you don’t bring your expertise to the table and assert it – desperate architects are order takers.”  Good architects listen, bad ones don’t. Jennifer also mentioned that KGO does not negotiate architect fees – “I’m appalled at the low fees!” Brian talked about the architect’s ability and opportunity to solve world problems – particularly the urgency of sustainability. “Our time is limited on the planet and we’re not grasping the opportunity enough.”  The discussion ended on the importance of soft skills, especially charisma.  Martin suggested that each of us should get a business coach to be more effective. 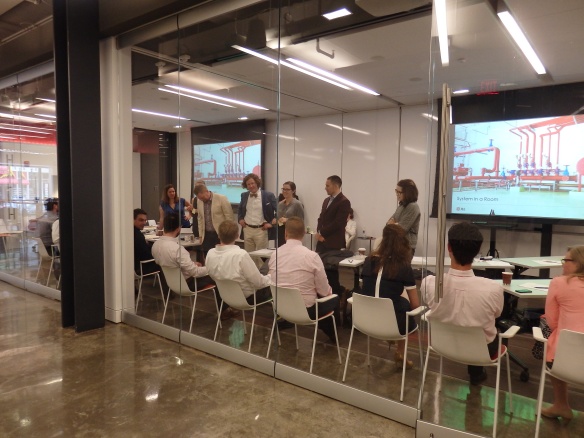 Kim Vanderland, Senior Vice President and Holly Ellis, LEED AP ID+C, Senior Associate, both from Jones Lang LaSalle, switched things up and led the group on a change management exercise. They illustrated key challenges by dividing us into 2 groups and splitting us into different rooms.  We would later find out that these two groups were ‘managers’ and ‘employees’.  All participants were given 1 dollar bills and then required to give them back to the bank. The employees were given numbers and asked to sit in a line of chairs, not in numerical order. The employees would get back their 1 dollar if they did not move themselves or their chairs.  Little did the employees know that the managers were in another room being told that their job was to get the employees to arrange in numerical order – if they could make that happen, they would receive a company bonus. The managers came back in to find the employees sitting in a random order (they assumed) and started asking the employees to reveal their numbers in an effort to get everyone in numerical order.  They did so without initially explaining their objective. The employees thought this was a trick and didn’t reveal because they wanted to get their dollars back.  Rearranging people in chairs turned out to be harder than everyone thought! After a few exchanges, it was revealed that there was a mistrust between the “sitters” (employees) and the “standers” (managers) and the management was unable to get the employees to re-arrange.  It was a very enlightening exercise that revealed an initial lack of communication as making even the simplest tasks difficult. 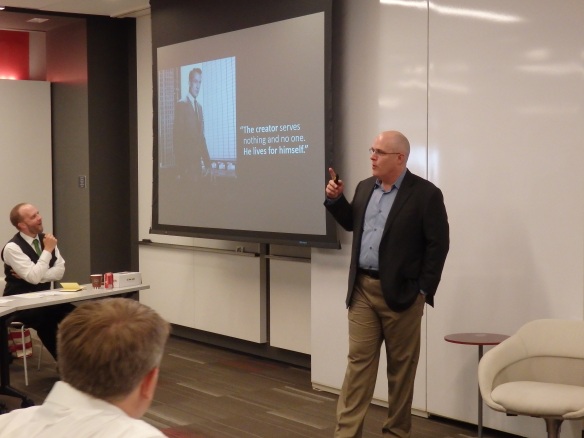 The final presentation of the day came from Lance Hosey, FAIA, LEED AP, Chief Sustainability Officer at RTKL.  Lance gave a very animated talk about the practice and how shifts in society and the environment present new opportunities for the profession to rethink its standards and the values we offer.  He focused on four key concepts: promote value, seek diversity, collaborate and make better places. He explained the lack of diversity in our field and explained that diversity is “not just about people who don’t look like you, but it’s about people who don’t think like you.”  This is crucial to our process as it opens our minds to solutions and ideas we may have not thought about previously.

The session ended with a party to celebrate the 2014-2015 class.  Sean Stadler and Ryan McEnroe said a few words about the program, the class and shared fond memories of Christopher Kelley.  They then presented each of the scholars with their diplomas while session highlights were cycling on the screens of the DAC.  All in all, it was a fantastic session, great party, and most of all, an extremely valuable and rewarding program. The celebration was bittersweet, but we were all happy knowing that another 16 scholars will get the same opportunity and represent the 2015-2016 class.